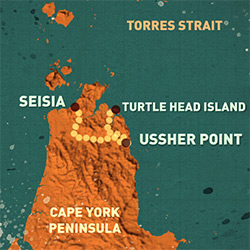 This episode, Jase and Simon start out from Seisia at the top of Cape York and head down the Ussher Point track. They’re on the hunt for a Bell P-39 Airacobra plane wreck rusting away on the beach. But the track turns to sand, which means tyre pressure needs an adjustment if they have any hope of getting to an oceanside campsite.

They head out on the buggies to navigate the headlands to try find the wreck site. Jase and Simon take a moment to remember the story of these pilots who ended up on this beach.

However, the problem with coming down a sandy hill is always getting back up. And as predicted, it becomes a challenge for both trucks dragging trailers.

The fellas think the next challenge is finding an overgrown track, but an even bigger challenge comes in the way of a faulty gearbox which means it’s time to head back to civilization. Allan’s Automatics in Cairns comes to the rescue with a loaner gearbox, and three days later, the boys are back to where they started.

The track to the Escape River offers much resistance in the way of fallen trees, overgrown branches, and wasp nests at every turn. How much can they take?

They set up camp at Sadd Point and make a few friends along the way. They hit the Escape River in the tinny in order to make it out to Turtle Head Island before nightfall. Once there, they lend a hand to Rusty and Bronwyn who put the boys to work harvesting mabe pearls. With the meat leftover from production, Jase whips up Bronwyn’s Pearl Oysters.

They can’t leave without a bit of night fishing off the jetty, and the monsters are biting!