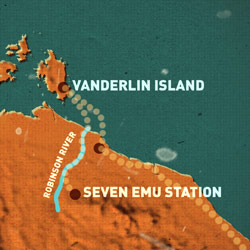 In this episode, Jase and Simon are determined to finish the story of Little Eva which started last week. Despite not being able to see the plane herself, they are able to follow the path that the crewmen took heading west.

The alternator on Jason’s truck started giving him troubles last week, and that only continues. Thankfully, they are well equipped with battery chargers and generators to keep them going, but it definitely highlights the importance of being prepared for anything when you are far from help.

They finally make it to Seven Emu Station and meet up with Clarry and the crew who are happy to take the boys along as they muster the work horses. Simon gets the ride of his life.

Later the make their way down to the Robinson River. To check out what’s swimming below, they rig up an offroad elevator. They give the fishing gear a workout before heading back up the cliff.

Getting the big boat into the water takes a bit of work, but soon they are out on the water heading past Vanderlin Island into the Gulf of Carpentaria. As usual, they need to fish for their supper. Will it be shark or cod on the menu tonight?

Getting the boat back out of the water takes some work, as the trailer gets stuck in the bank. Chaining the trucks together is the only way to get enough weight to get it out.

The next day, they follow in the footsteps of some of the men who survived the crash of Little Eva. It is hard to imagine how anyone could make it 400 kilometers on foot, living off the land for five months out in this harsh landscape. It is truly a tale of survival against all the odds. 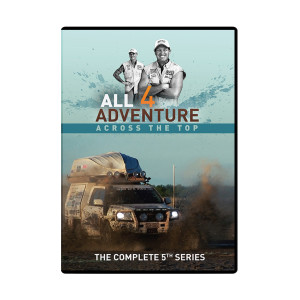