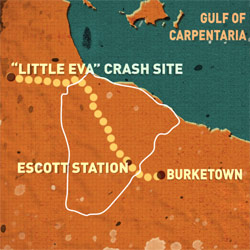 In this episode, Jase and Simon are back at the trucks, and this time they are following a historical trail involving American Servicemen, the local police and a part of the Indigenous culture of this area.

They meet up with a helicopter pilot at Escott Station who is able to give Jase a ride over the beautiful countryside. And from that vantage point, they are able to spot the wreckage of Little Eva, an American WW2 plane. Jase notes the GPS location, and once back at the station, they are able to plot a way to get out there from the ground.

They set out in the 4WDs and face a couple of challenges in the way of bogs and creek crossings. Plus Jase has a battery warning light pointing to alternator issues, but thankfully the solar panels and other gear will keep him after a night at camp where Jase whips up an upside-down 2-fruits butter cake for Simon’s dessert.

In the morning, they set out again for Little Eva. They go as far as the end of the track, and then it’s time to bash their way in the buggies. The country looked more open by chopper, but the vegetation is tight and staking tires is only a matter of time. They keep pushing on, but then something goes bang. It looks like it may be a broken CV-joint, which makes them reconsider their quest.

The Australian bush can beat even the best equipment, and it gives a whole new respect for the servicemen who had to wander through without any supplies. Their story continues next week.