Get a closer look at all the gear as the boys walk you through the vehicles hitting the road in Series 10, starting Sunday at 1pm on 10!

The boys made some changes to the gear that’s going on the road for Series 10 including a new canopy wired up with all the goods by the experts at BatteryWorld, an exhaust upgrade to the 200, and a suspension upgrade for a new vehicle that’s hitting the road. Check out the Rig Build videos below and then head to the Gear pages to get a closer look at the rest of the gear!

New Decade of Dirt gear on the webstore:

Returning November 4th at 1pm on TEN
A Decade of Dirt: Episode 1 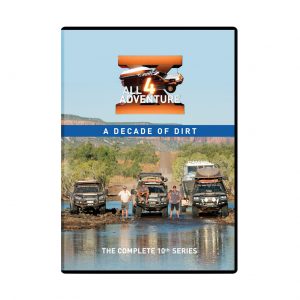